It is a well-known fact that economically speaking humanity was stagnating during the so-called Malthusian era, which lasted until around 1800, or the time of the Industrial Revolution. At this time, as brains started becoming more important, people started to have fewer children who were educated better. This is the well-known quantity-quality trade-off.

Hunter gatherers had relatively few children because they needed to take care of them (while food was relatively scarce) and carry them constantly (they were nomadic). Then as agricultural societies sprang up, this changed. These societies were settled down, so they could have a large number of children. They could also feed those children, because compared to a hunter gatherer society, food became more abundant (but less nutritious). Furthermore, these societies also needed their children to work on the fields. Coupled with high infant mortality, this meant that people in these societies had a very large number of children.

As the Industrial Revolution started, technological changes ensued and the return to education rose sharply. Urbanization meant that children’s work on fields was not necessary anymore. Parents instead opted to educate their children. But this had costs, so people were having fewer children so that they could afford things like education for them. This is how the quantity-quality trade-off arose.

An interesting question, however, is how this happened. Consider this: fecundity (i.e. the ability to reproduce) is heritable, and Galor and Klemp (2013) showed that it is positively related to the number of children one has. I.e. the better you are at reproduction, the more children you will have (see Figure A below, where “weeks from marriage to first birth” proxies for fecundity). Somewhat unsurprising. But if this trait is heritable, then your descendants would have lot of children as well, and their descendants too. But then, why have birth rates been dropping significantly from the Industrial Revolution onwards? 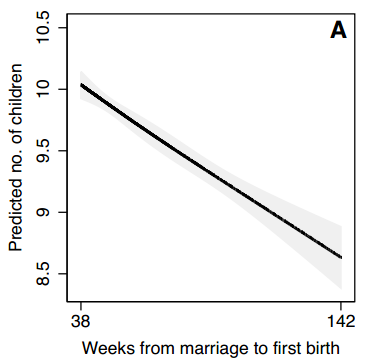 (Note that the data for the figures are from 17th and 18th centuries when marriage was equivalent to signaling readiness to start childbearing. Thus those that had their first-born 38 weeks after marriage had the highest fecundity in general.)

The reason is that in this era, “natural” selection did not favor people with a lot of children anymore. Because more children meant less education per child, which meant less success, which meant lower incomes, which meant a lower number of grandchildren despite higher fecundity.

Therefore, quite interestingly what happened after the Malthusian era was not that the most fertile people reduced their number of children. No, that stayed high. What happened is that people with a worse fecundity “got selected” by nature (or the overall circumstances of the era). They were more fit to survive and reproduce. If you iterate this through centuries, you might realize that low birth rates today in the developed world might not only be due to choice or outside pressure to make different decisions about child bearing, but they also have an evolutionary reason.

Matter of fact, given the heritability of fecundity, society at large today couldn’t have as high a birth rate as it had centuries ago, even if it wanted to. The authors find that the most successful people had their first-born 65 weeks after marriage vs. the sample median of 53 weeks. Indicating that the the optimal fecundity is quite low.

Side note: Don’t worry. I never heard the word fecundity until reading this paper, either.